Nancy grew up in Southampton, MA and is a 1975 graduate of Hampshire Regional High School.

Nancy currently still holds four American long distance running records that she set in the early 1980's. Three of those records, 15,000 meters, 10 miles and the one hour run were set in one track race at the University of Massachusetts in Amherst, Massachusetts on June 25, 1981.

In 1980, in her first attempt at the marathon distance, Nancy won the Five College Marathon in South Hadley, MA. This was a qualifying even to the Avon International Marathon for Women in London, England held later that year. Nancy would go on to place second at this London race in 2:36:02. That time was the #2 ranked marathon time in the world that year. Nancy returned to the Avon event the following year, held this time in Ottawa, Canada and won, beating her friend and future 1984 Women’s Olympic Marathon gold medalist Joan Benoit. Nancy also won Freihofer’s Run for Women that year. The following year, in 1982, she won the Chicago Marathon in a person best time of 2:33:22.

From Joan Benoit Samuelson:
"Nancy was a great runner. She came onto the scene rather quickly and climbed quickly as well. She was a real tenacious runner. She gave it everything she had. She beat me several times when we went head to head. She was tenacious and worked very hard."

Nancy was self-coached, her only previous coaching coming from her days at Hampshire Regional High School. She held many Pioneer Valley road race records in the local races and is still the Greater Springfield Harrier Summer 8 K record holder.

In 1979, Nancy married Paul Conz, a former blues drummer. They have two children, Derek Conz and Jarryd Conz. On February 8, 2017, Nancy died in Southampton, MA after a near 20-year battle with adenoid cystic carcinoma. She was 59 years old. 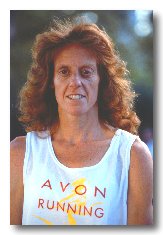