Brian started running in his forties after he quit smoking and joined the Springfield YMCA. What started out as a diversion from smoking quickly became a labor of love for Brian. Brian quickly became a fixture on the local running scene and was racing most weekends. His wife Mary noted “Brian loved every minute of running, the community, his friends- it quickly became central to our lives”.

When not running Brian became a force on the volunteer front at local races. Whether it was timing a race, or simply helping out, Brian could always be counted on to show up and pitch-in. “Runner’s were Brian’s people’, Mary said, “he just loved to be around them”. While outside of running Brian could be a quiet person, when helping out at races, Brian was a vocal and passionate volunteer.

In 2018, Brian was diagnosed with cancer. While that might stop the average person, it only emboldened Brian to volunteer more. When Brian heard about the establishment of the Western Mass Runners Hall of Fame, he quickly put his hand up to volunteer. In his short stint on the Board of Directors, Brian was instrumental in getting the momentum going and creating the outline for this Hall. As his health got progressively worse, Brian’s commitment didn’t falter. He still volunteered for the Hall of Fame work and at local races. Eleven days before he passed away, Brian was out on the course of the Father’s Day Road race marking the course- he would have it no other way.

Brian’s commitment to running and his selflessness are the reasons why the founding members of the Western Mass Runners Hall of Fame Board of Directors established the Volunteer of the Year Award. Brian embodied these ideals throughout his life. The award is being given posthumously to Brian and going forward, it will be awarded annually and known as the Brian E. Goddu Volunteer of the Year Award. 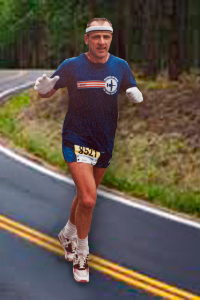