Charlie started his running career later in life, at the age of 45 to be exact. Charlie was a salesman, on the road five days a week. His sales territory was the United States, east of the Mississippi. He often found himself in a little town, in the middle of nowhere, without much to do. I am not really sure what made Charlie turn to running, but once bitten by the bug, he was all in. And just like in whatever he did, he strived for perfection.

Without the benefit of formal coaching, Charlie embarked on his new hobby. To gain knowledge about running, he began to read. To this day, many of those introductory books and magazines about running, nutrition, and training are still in his library. As Charlie trained, he began to compete against himself. He would log his times, give a brief description on the conditions, how felt and where he thought he could do better on each run. He used to say “a dream becomes a goal when you write it down.” Anybody that knew Charlie understood he was all about setting and beating his goals.
His first race was on a Monday night at Stanley Park. I am guessing it was sometime in 1982 or ‘83. I cannot tell you how he did, what his time was or anything else about that race, I know he could. He could tell you about the friendships and friendly rivalries that were formed or forged that day. He could tell what he learned, who he learned it from. He could tell you how much time he planned to shave off his next run and how he was going to do it. Soon, along with the regular Monday night races at Stanley Park, Charlie began running the Saturday morning races at Forest Park, and before he knew it he was running and racing on a weekly basis.

As Charlie honed his technical skills, he decided to run marathons, which lead to competing in triathlons and duathlons. He finished three Boston Marathons, countless half-marathons and too many 5 and 10k local events to list. Charlie built a reputation as a competitor who would show up and give you 100% all the time. Many of his local race records have stood the test of time. As Charlie’s running prowess developed, he set his sights on biking and swimming. He swam many laps in the local ponds (Ludlow and Russell Ponds), Boys Club and even the ocean.

Charlie started biking and swimming in 1985. He participated in many Bike America New England events and cycled in many places around the world. His work ethic and persistence paid off and in 2006, Charlie was named to Team USA and competed in the ITU Duathlon World Championships (65-69 male) in Corner Brook, Canada. In his world championship debut, Charlie finished in 7th place in the world age group 65-69 male.

Charlie went on to compete in the ITU World Championships three more times: in 2007, Charlie had a biking accident and DNF that race. In 2008, Rimini, Italy he placed 8th. His best finish came in 2009,in Concord, NC where, at the age of 72, he placed 3rd, his first podium finish at an international event.

With his duathlon experience he focused even more intently on the local running scene..

My father was an intense, disciplined competitor who loved the local race scene, the rivalries and friendships it brought him. He would be honored to receive such recognition for his efforts. 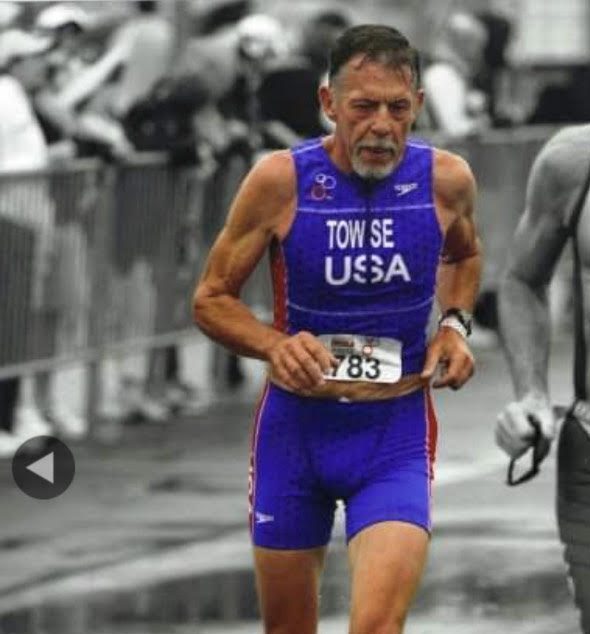