Dick and Rick Hoyt are the inspiring "Team Hoyt", a father-son duo who have advocated for people living with disabilities. They spread the belief of “YES YOU CAN” through their participation in athletic events around the world. They have been to Japan, El Salvador, Germany, and Japan, as well as all over the USA.

Dick entered the military after high school and moved around a bit with his family. The family finally settled in Westfield, MA in the early 1970’s when Dick was stationed at Barnes Air National Guard base there. Dick retired from the military in 1995 as a Lt. Colonel. He served 35 years in the military.

Dick’s 3 sons (Rick, Russell, Rob) all attended Westfield middle school and then all graduated from Westfield High School. Rob settled in Westfield when he married, and his 2 sons went through the school system in Westfield as well.
In the spring of 1977 Rick heard about a local Westfield State College athlete (Jimmy Banacos) who was injured in an accident and became paralyzed. Rick wanted to show him that life goes on even if you have to use a wheelchair. The students were organizing a 5 mile race in Westfield to raise money for Jimmy’s medical bills. Rick wanted to run in the race and he asked Dick to push him. Dick was not a runner at that time. Dick pushed Rick in his clunky wheelchair and they did the whole 5 mile race. That inspired both of them to continue running, as Rick said he did not feel disabled when Dick was running with him. Rick felt like he was running as well.

Dick went on to get a running chair built with 2 wheels in the back and one in the front. It was a lot easier to run with than the wheelchair. In 1978 they took that running chair and ran their first official race with a running chair at the Glendi race in Springfield. That was the beginning of their running career. Dick and Rick over the years ran in several races in Western Mass, including Holyoke St Patrick’s Day, races through Forest Park, and an annual race that Richie Neal organized for several years.
Since then, Dick has competed with his son, Rick, in over 1100 race events, including marathons (32 Boston Marathons), duathlons, and triathlons. Because of their efforts, there are now duos all over the world taking part in race events and triathlons. There are also 11 Team Hoyt chapters around the USA and Canada, which continue to carry on their mission.

Dick and Rick’s athletic endeavors have earned them inductions into the Ford Ironman World Championship Hall of Fame, the Marine Corps Marathon Hall of Fame, and most recently, the USA Triathlon Hall of Fame. In 2013 they received the ESPY Jimmy Valvano Award for Perseverance. 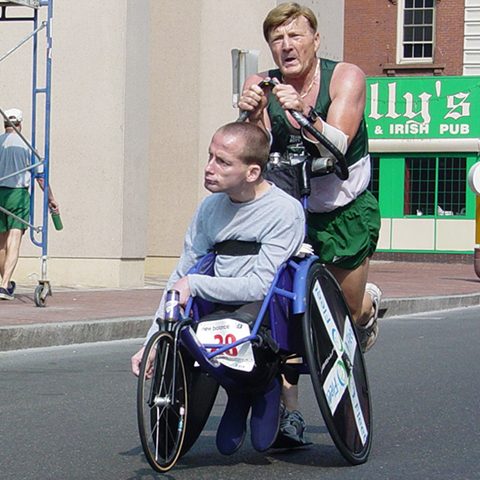