The Grant’s-Don and Sue are known for hosting the famous Tuesday Night 5 K cross country races at the Northampton Community Gardens. Together, they participated in road races from the 5K to the marathon, then in 1986, used their race experience and developed the 5 K XC races. Along with their daughter, April, they created a simple, but a challenging course run along the path ways of the vocational school property. It is now a Tuesday night tradition to hear that fateful word “Go” and the runners take off on the wet cold spring nights and those hotter than hell mid-summer nights to challenge the course. The race has a record board with “who’s who” in the Western Mass running on it.
Don and Sue are long time members of the Sugarloaf Mountain Athletic Club (SMAC). They have volunteered with many club events, from all-comer track meets, to the Amherst 10 miler and every other type of race or event put on by the club. Don helped save SMAC in 1977 when the club had lost many members and officers, he stepped up and reorganized the club continuing its legacy as a longtime Western Mass running club. Don served as president in 1978 and in 1988 and was on the club board for many years. Don is an artist/painter by trade and for many years did the Sugarloaf Sun newsletter cover and many illustrations in the Sun magazine.
Both Don and Sue are long time runners, and completed in all the western Mass and New England races for years. Sue raced many of the early women races with the SMAC team. Her mile PR is 6:38 and her 10K best is 44:15. Don was always known as downhill Don; no one could match his crazy downhill running style. He was a sub 3 hour marathoner and a 4:40 miler into his early days, back in the days everyone ran fast! Don’s 5K road PR was 16:30 and on his PR on his Northampton 5K course is 18:24. Don continues to the pavement in the local races and is a frequent runner at the winter Snow Storm Classic races each winter Saturday. Sue continues to attend races and is always a friendly cheering face out on the course.
The Tuesday night course has been adopted by the Northampton high school team as their race course for the home meets. The Smith College women’s team uses part on the course for their home meets as well. There has even been a song written about it (see below) and NPR has featured the race in a story recently. We can all thank the Grant’s for getting the Northampton races on the map for all of New England to enjoy.

(Chorus): Our race keeps a record
Of the best times all listed by age,
From five up to ninety
There’s one for each human life stage,
You hope you might set one,
You wait for the fateful word, “Go!”
You finish exhausted,
But pleased whether win, place or show.

Every Tuesday a lot of good people come up
To the Northampton cross-country race,
They give us their names, make a guess at their times,
Pay their fee and then get into place.
When Philemon Terer came over to run,
We knew Sandu’s record might fall,
Now that Philemon’s turned in fourteen-forty-five,
His time is the fastest of all.

Jim Farrick comes up from Kollmorgen to race,
And work on his ongoing streak,
He’s run it in hot weather, run it in cold,
Run it week after week after week.
The Beavers come up in the spring and the fall,
Setting records, and lending a hand,
There’s Spencer and Julie, Dennis, Jason and Kim
And Alyssa, best-dressed in the land.
(repeat chorus)

Ron Hebert makes sure that our timers all work,
Bill Romito brings honey for all,
Dave Whitcomb's so good at predicting his time,
He's got race bucks to paper the wall.
Lou with his mower has cut down the weeds
That threatened to blot out our course,
Carl's given us syrup and strawberry jam,
And combated the wind's mighty force.

Our Five-K’s been held in the heat and the cold,
In the wind, in the snow and the rain,
But the strangest of all was the night that the steer
Ambled over in search of some grain.
He slurped up the water we meant to give out,
Kicked over the cups and the pail,
Two boys led him home with a leash round his horns,
Since he couldn’t be pulled by his tail.
(repeat chorus)

A whole lot of rain fell on Tuesdays this year,
And so did big branches of trees,
But Harry and Mike quickly cleared out the way,
It’s a task they accomplish with ease.
We stand there and chat when the last race is done,
When a sound from the sky rings so clear,
And I call to the geese as they race their way south,
“We’ll see you in April next year!”
(repeat chorus - last time!) 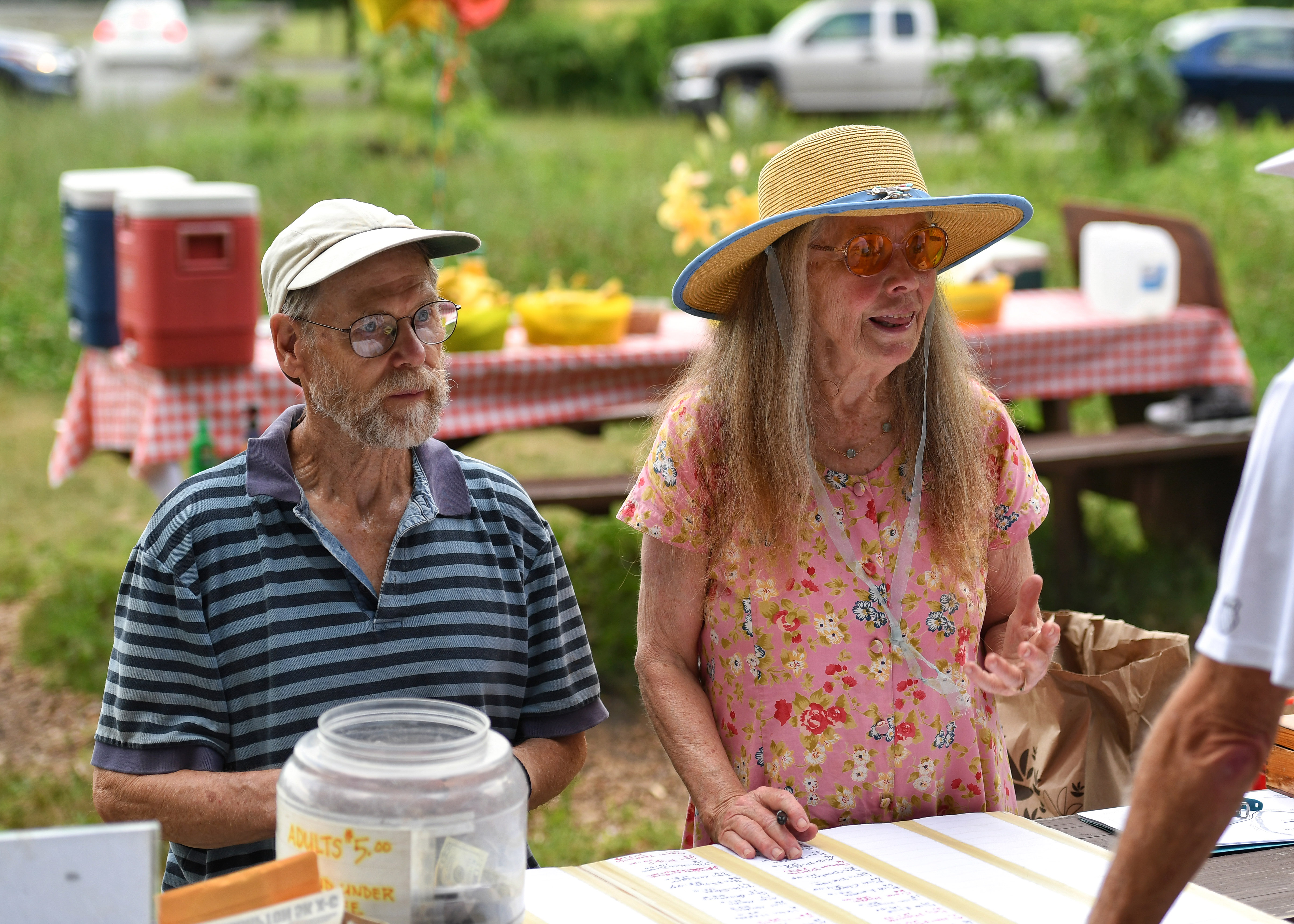