Roland grew up in Springfield and spent 3 years in the US Army. While in the military service, he was the 4th US Army Triathlon champion. Once out of the service, he took up wrestling and became the New England AAU wrestling champion, competing at the USA Olympic final wrestling trials. Running has always been important to Roland, and while in college at Springfield College, he ran track and x-country. In college cross country, Roland ran 3 miles in 14:45 and placed 15th at the IC4A's college division x-country race. After graduating, he ran road races and set many age group records at local weekly races. He holds many of these records to this day. In 1972, he won the prestigious Mt Washington road race and went on to place in the top 10 finishers five times.

At the age of 43, Roland broke the New Hampshire marathon state record for the 40 year and over category, running a time of 2:35:49. When he was 53, he was on a 50 and over 4x1 mile relay which broke the world record. He ran a 4:57 mile on his relay leg. Roland has won numerous Masters' National Championships in indoor and outdoor track as well as x-country.
Roland has also been ranked number 1 on occasion in the steeplechase in the USA. At the World Masters' track championships, he placed as high as 4th in the steeplechase and won a silver medal with the 70 and over USA x-country team. When he was 75, he won the Individual National Grand Prix title and was also a member of the 70 and over National Grand Prix team that won the championship. Roland has not slowed down, and recently won the 2021 USATF National 12k Masters Championship 80-84 year old division.
Roland is married to Diane and has a daughter, Kim, and a son, Mike, along with 5 grandchildren. 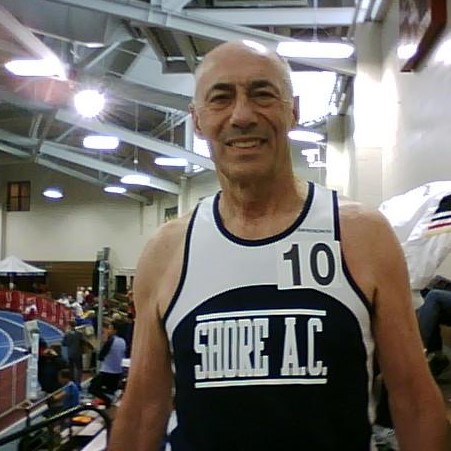